The end of Virgin Media

I’ve had Virgin Media or rather Telewest (Blueyonder as the internet part of their company was called) since they first introduced 512kbs broadband. to the UK in, I am guessing but I was in year 6 at Fortismere, so i believe 2001 or 2002. I clearly remember talking to Alex Tenyson about it and that I would be able to download the lord of the rings films from Kazza in 350seconds. He pointed out I wouldn’t actually get a download of that speed 🙁 More like 50kps download. I’d ben trying to download the liveCD’s of the film, 3 discs all on dial up 🙂

Since then, its been consistently upgraded and now I sit on a 300mbs connection, which yields a weak 60mbps and a 12mbps upload. I must say, I’ve seemingly always been disappointed with virgins service. I’ve had it every house I’ve been in and never ever once got the full speed I was paying for. They have offered me a constant £9 reduction on my bill, which still comes out at £118 a month. Ok, I have Sky Sports on that. But still, its not good enough. In my last property which I was there for 4 years, we had 6 visits from a engineer, here I haven’t even bothered. I got the discount and there were problems in our area which were to last 2 years apparently. Anyway, its over now… I hope. 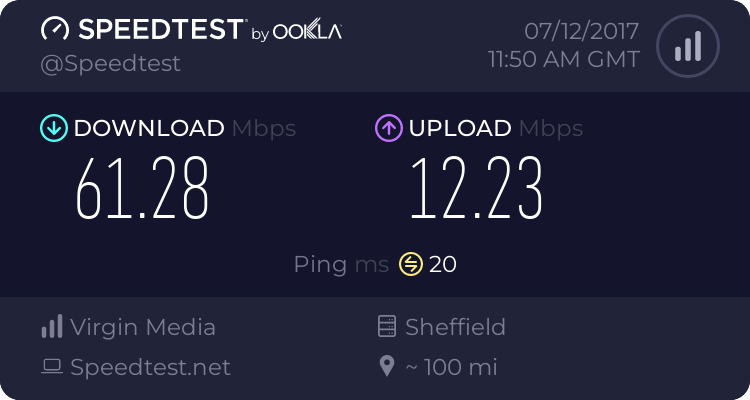 I didn’t think this was a problem until I found out about https://www.hyperoptic.com/. I don’t remember where I first heard about these guys, but in Febuary 2016 I found their site and signed up my interest, I then started to talk to my near by friends (neighbours) and told them to register their interest as well. Now some 16 months later today it gets installed!! 1gb internet up and down! lol I’m excited! Very excited!

I will return with a speed test soon lol